switchsell
1 Views 0
SaveSavedRemoved 0
Back in 2017, we sold our 265 horsepower Subaru WRX for a 78 horsepower Mitsubishi Mirage ES Hatchback. Crazy, eh? Well, this summer will mark four years of Mirage ownership. Despite the Mirage being on sale in the U.S. since 2014, there are still people out there that have questions about these cars. From roadworthiness to fuel economy, and other ownership items, I decided to debunk some Mitsubishi Mirage myths.

MYTH: With only 78 horsepower, the Mirage can’t keep up with traffic.

You don’t need 300 HP to navigate America’s highways and byways. Heck, you don’t even need 100 HP! Around town the Mirage easily zips about, sure, but what about on the Interstate? The reality is the car does just fine. No, it’s not as fast as a Ferrari, but it will easily cruise at 70 or even 80 MPH. While it’s not going to get its optimal fuel economy at those speeds, it will do the legal speed limit. Passing? Yes, passing needs to be a bit more calculated than if you’re driving something with more power, but it’s doable. While the car only has between 74–78 HP, it also weighs as little as 1,973 lbs. Remember: People have been driving across this country in 40 HP VW Beetles for decades. A Mirage is a rocket ship comparatively. FYI, the fuel economy is underrated at 37 city and 43 highway. We just got 47 MPG on a 300 mile road trip and we weren’t even trying.

MYTH: A Mirage may not be able to take longer trips.

Some people have said they don’t think the Mirage’s 1.2-liter three-cylinder engine would be able to make longer road trips. Now, I don’t know what people think would happen, but this 1,200cc engine is perfectly capable of long trips. While we only have a tick over 18,000 miles on our ’17 Mirage, it has been driven from Portland to Montana and back, from Portland to British Columbia and back, and up and over the mountains of central Oregon and back. Mitsubishi—or any automaker—isn’t going to sell a vehicle that can’t handle hills or extended periods of driving. The Mirage is fully capable of cross-country drives.

MYTH: A Mirage is a throw-away car that isn’t capable of longevity.

Tell that to Jerry and Janice Huot of Minnesota. They put 414,000 miles (yes, miles, not kilometers) on their 2014 Mirage. And yes, it had a CVT, not a five-speed manual. Like any vehicle, keeping up on maintenance is important to high mileage. While the Mirage isn’t an expensive car, there’s no reason you can’t hang onto it for a long time and put a lot of clicks on the odometer.

MYTH: The Mirage is unsafe.

The Mirage has gotten mostly high scores from the Insurance Institute of Highway Safety (IIHS) and the National Highway Traffic Safety Administration (NHTSA). The 2014–2015 Mirages, however, get a “poor” rating for their small overlap: front driver’s side test. Mitsubishi redesigned the car for 2017 and improved this score. All other scores have been top-notch.
In 2020, the Mirage got the unfortunate top spot on the iseecars.com list of most dangerous cars sold in the U.S. between 2013 and 2017. According to their website, “iSeeCars.com analyzed fatality data of model year 2013-2017 cars from the U.S. Fatality Analysis Reporting System (FARS) and more than 25 million used cars from the same model years to determine the vehicles that are most often involved in fatal accidents.”
Being this is a juicy headline, many news outlets glommed onto it. I urge you to read the iseecars.com commentary about why the Mirage, and other subcompact cars, rank high on this list.
My last note on this: I’d say that with all the airbags, crumple zones, and other safety features, a Mirage is still likely a lot safer than cars that are older, and certainly safer than cars without airbags. But you can’t argue against physics. If you’re not comfortable driving a small car, then buy something bigger. Motorcycles are dangerous too, but people still ride them.

MYTH: No one actually wants a Mirage. It’s only for those with poor credit.

In 2017 we sold our 265 HP Subaru WRX. We took that cash, put it in the bank for other project cars and travel funding, and bought our Mirage brand-new for $9,600 USD out the door. The entire reason Subcompact Culture exists is because there are some people who generally like small cars. We bought this car because we wanted to, not because of credit issues. Sure, Mitsubishi may sell a fair bit of these low-cost cars to people with not-so-great credit, but there are plenty of users on MirageForum.com and the multiple Mirage groups on Facebook that have good credit, but appreciate the car’s frugality, minimalist-nature, and quirky personality. By the way, in places like Indonesia and the Philippines, these cars have a big following and are often equipped with extensive modifications. Heck, they even race them. 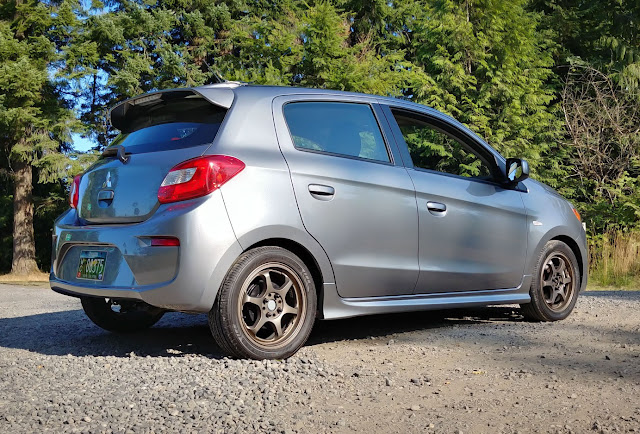 A bit about our Mirage, aka, The Rage

Our Mirage, which we call The Rage, has a host of improvements to make the vehicle look, perform, and sound better. This includes:
This article was originally published by Google.com. Read the original article here.
SaveSavedRemoved 0

THE OPPORTUNITY OF A LIFETIME FOR AUTOMOTIVE DESIGN.

Official: Mercedes Vision EQXX with the 50% smaller volume battery but almost the same capacity like at EQS