switchsell
3 Views 0
SaveSavedRemoved 0
From 2012 to 2015, Toyota’s Scion brand offered what might be the company’s most unique vehicle. The Scion iQ microcar was squarely aimed at another microcar, the Smart Fortwo (iQ vs Smart—get it?). It’s not like the Smart Fortwo was setting the American small car segment on fire with sales, so it was always curious that of all companies, Toyota decided to go after the Fortwo. But Scion—the funky youth-oriented arm of the Japanese automaker, did indeed target Smart. Their tactics were far different than Smart’s. And like most of the Scions, they played to enthusiasts who did some really neat things with these petite people movers.
Joe Gallardo of Downey, California, who goes by @kingiq on Instagram, is one of these iQ owners who took the car not only to the next level but to levels hardly imaginable. His little Scion is a 2012 model with a metal widebody kit and a ton of customization.
“I purchased the iQ back in April of 2012 as a commuter car for my wife. She wanted to add a few things to make it stand out,” says Joe. “We started modifying it a few weeks later. After a few months, my wife handed me the keys and said ‘It’s yours!’ That’s when things really started to take off and the plan to become the Scion King began. Shortly after, we were offered a feature spot at SEMA 2012.”
So why an iQ? Joe said it’s different and the platform is mostly ignored in the show scene. He adds it’s the most difficult Scion platform to modify.
Let’s take a look at this incredible iQ and see what makes it one of the most unique modern microcars out there. 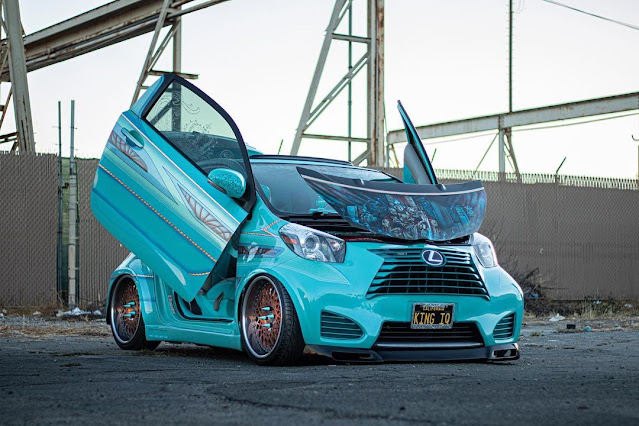 For starters, the car has this crazy widebody kit. Joe claims it’s the only true widebody iQ in the U.S. It has a custom Lexus RX front end and Tiffany blue color with a variety of multi-color lowrider patterns. Unlike the Smart Fortwo, the Scion iQ had the motor under the front hood. 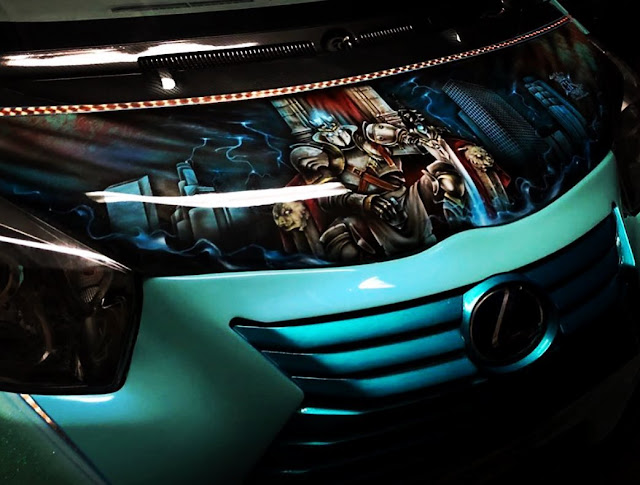 The hood on this iQ is a motorized tilt version with a King Arthur airbrush mural. Yep, you read that right. The custom airbrushing continues with designs on the door jambs, rear hatch, and even under the hood. Exterior trim pieces are by GR-one Coronado. To continue the wide-and-low look, the iQ has custom side skirts, a custom front lip, and a custom rear diffuser and wing. And if that wasn’t enough, the windows, windshield, and headlights are all custom-etched. The car has vertical doors, and last (and certainly not least), it’s got a fully motorized ragtop. To say this iQ is customized is a gross understatement. 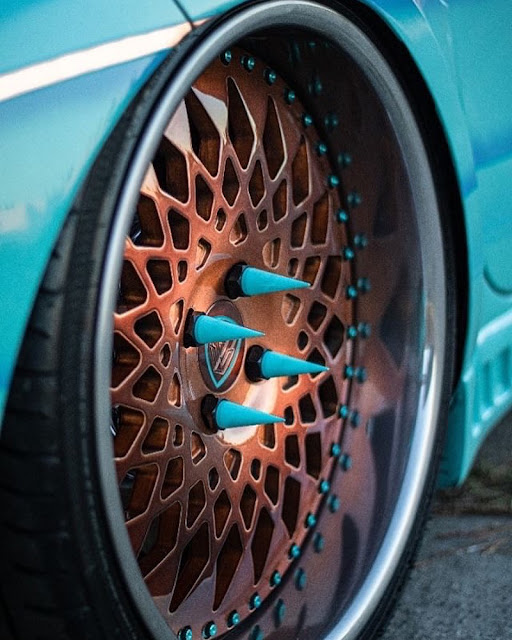 A ride like this has to have just the right rolling stock. Joe selected Infinitewerks SSL1 three-piece wheels and wrapped them in 215/35R18 Nexan tires. At the time of this writing, Joe says his wheels are out for engraving, too. A ride like this doesn’t just have lug nuts, either: it has engraved True Spike lug nuts, covers, and spikes. Behind those rollers are R1 Performance engraved rotors and drums. 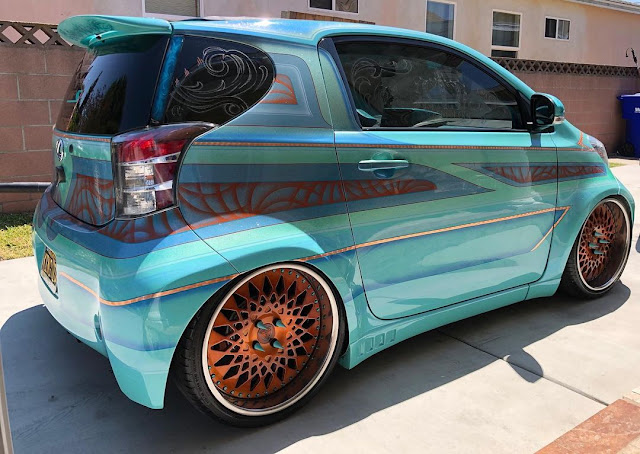 When you’re doing a widebody vehicle, you’ve got to get that stance nailed. So Joe uses a custom air ride system, with many of the components located on the undercarriage and then powdercaoted. 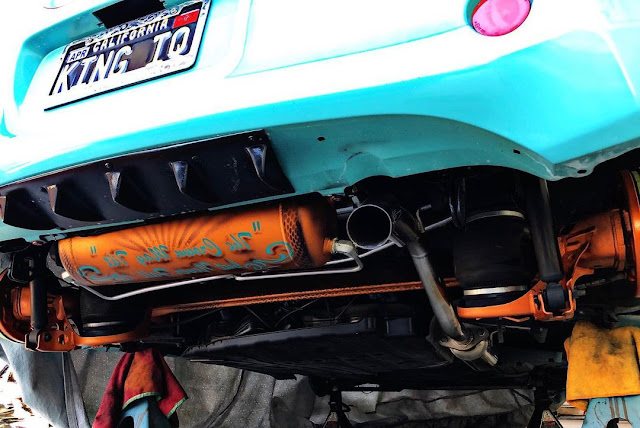 This includes the airbrushed five-gallon air tank with chrome hard lines, dual Viair compressors, and chromed and engraved switch boxes. And if that wasn’t enough, the rear subframe is also powdercoated. There’s a chromed and engraved Tanabe strut tower brace. Joe mentioned he’s having the undercarriage chromed and polished. 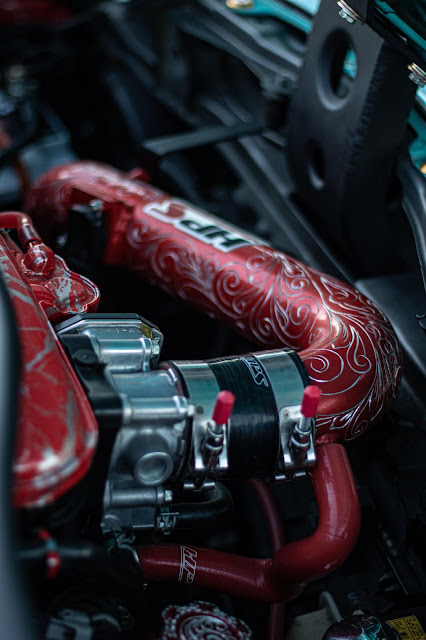 While the iQ isn’t going to be burning through tires due to extreme performance, Joe did invest in some additional power. He’s got a Power Commander fuel injection module and a DC Sports exhaust kit. He’s got an HPS hose kit and intake that’s been powdercoated and engraved. Other goodies include a powdercoated and engraved VMS Racing oil and radiator cap, and a Fullriver deep cycle battery. 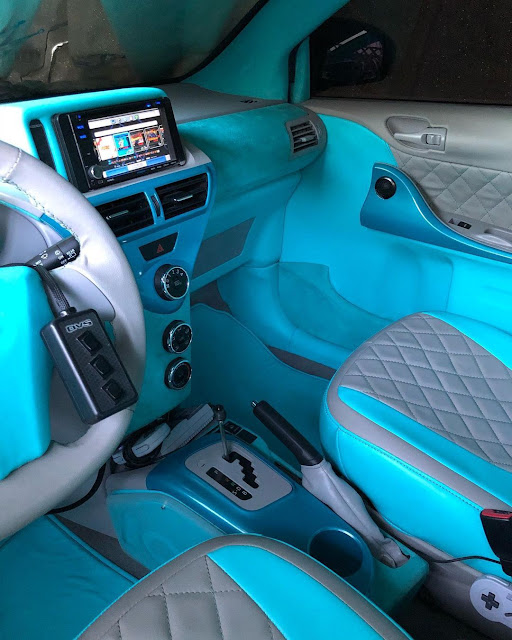 With all this customization, you know the interior is going to be fresh. It starts with two-tone leather and suede on the door panels, dash, pillars, seats, belts, headliner, carpet, and floor mats. There’s custom LED lighting as well. The etched theme continues on the plexiglass center console, pedals, and little tree car air freshener holder. ICE includes a SNES mini gaming console, double-din head unit, fiberglass rear side enclosures with two 8″ Soundstream subwoofers, and 2.5″ component speakers. There’s a rear seat delete (yes, the iQ had a rear seat) with more plexi and lighting. There’s also a 12″ subwoofer and two 8″ TV screens. Finally, a custom amp rack showcases three Soundstream amplifiers in a plexy housing with an 11.2″ screen.

A Little Car With a Lot of Passion

I asked Joe what his favorite part of the car is.
“There’s so many to list! The one-off metal widebody would be at the top of the list. There are very few show cars out with a true widebody,” he states. “You mostly see over-fender kits at all the shows.”
He also loves the Lexus RX grille. He modified and molded it to the bumper. “I was the first to do a Lexus front end and after that, I started seeing FR-S/86s with Lexus front ends”. Joe also mentions the lowrider-inspired paint job, which features 10 different colors along with the airbrushed murals. And all that etching? He says he hasn’t seen any other import with it in all his years in the scene (dating back to 1998).
It’s obvious there’s a huge amount of passion that went into a not-so-huge car. But that’s what makes enthusiasts who they are. They yearn to be different. They strive to create something unique. And even if it’s not your passion, the amount of effort, love, blood, sweat, and tears that go into something like this deserves a lot of respect and recognition.
“Building this car taught me a lot about creating something unique,” says Joe. Needless to say, Joe did that in spades. 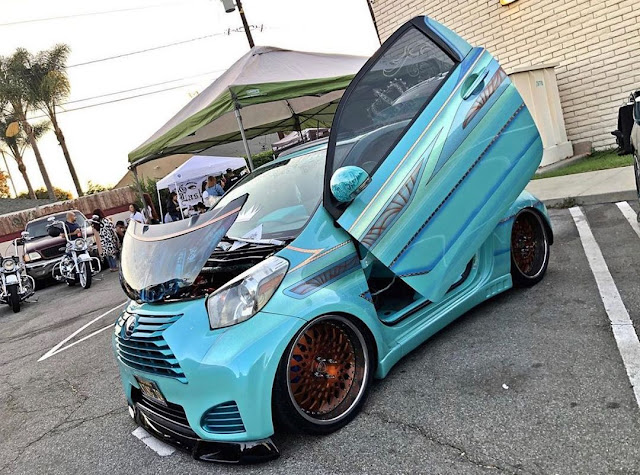 This article was originally published by Google.com. Read the original article here.
SaveSavedRemoved 0

The All New 2022 Suzuki Hayabusa is now in the Philippines